The Nuclotron at JINR will provide beams of heavy ions with energies up to 6A GeV for isospin symmetric nuclei, and 4.65A GeV for Au nuclei. In central heavy-ion collisions at these energies, nuclear densities of about 4 times nuclear matter density can be reached. These conditions are well suited to investigate the equation-of-state (EOS) of dense nuclear matter which plays a central role for the dynamics of core collapse supernovae and for the stability of neutron stars. At the same time, heavy-ion collisions are a rich source of strangeness, and the coalescence of kaons with lambdas or of lambdas with nucleons will produce a vast variety of multi-strange hyperons or of light hypernuclei, respectively. Even the production of light double-hypernuclei or of double-strange dibaryons is expected to be measurable in heavy-ion collisions at Nuclotron energies. The observation of those objects would represent a breakthrough in our understanding of strange matter, and would pave the road for the experimental exploration of the third (strangeness) dimension of the nuclear chart. The extension of the experimental program is related with the study of in-medium effects for vector mesons and strangeness decaying in hadronic modes. The studies of the p+p and p+A reactions for the reference is assumed.


Possible measurements of the electromagnetic probes is under discussion. 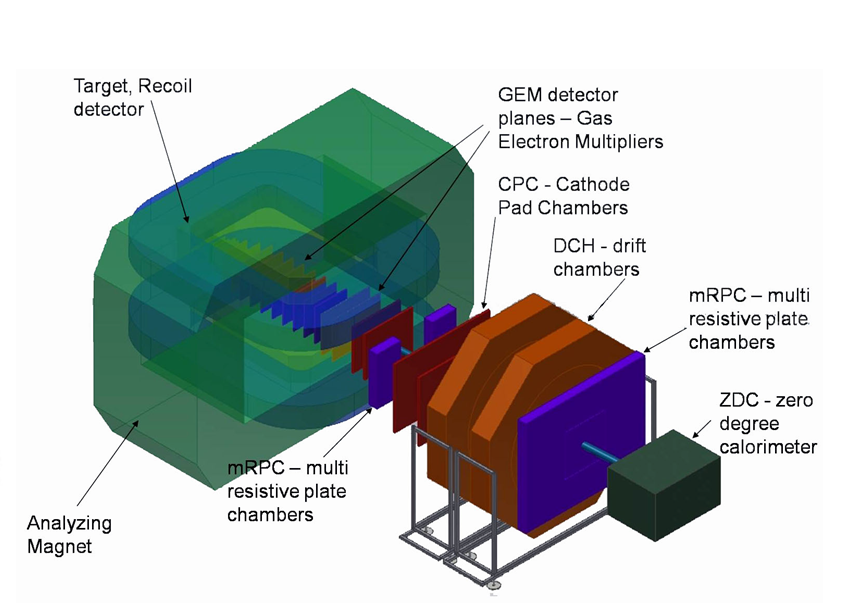 For these purposes, it is proposed to install an experimental setup in the fixed-target hall of the Nuclotron with the final goal to perform a research program focused on the production of strange matter in heavy-ion collisions at beam energies between 2 and 6A GeV. The basic setup will comprise a large-acceptance dipole magnet with inner tracking detector modules based on double-sided Silicon micro-strip sensors and gaseous detectors. The outer tracking will be based on the drift chambers and straw tube detector. Particle identification will be based on the time-of-flight measurements. The first commissioning run is scheduled for 2015.


Physics for the first stage of the BM@N spectrometer (start in 2015):


Physics for the BM@N spectrometer with silicon inner tracker (start in 2017):